Over the years, I have witnessed many instances of other horses, usually mares, taking on 'babysitter' duties for foals. Some active, protecting the foal from other horses, some just passive and tolerant. It has always worked well for me and the foals, and made weaning and training easier. While I have had babysitter geldings, tolerant sweet boys who basically just didn't beat the foals up. I never thought about any role for a stallion in babysitting.

Two years ago for Christmas, I bought my husband a MFT gelding. His first horse was a mare (our entire herd was mares), and he had decided he wanted a gelding (it's a guy thing).

We determined that Mithril (Reg name was Finesilver's Flying Shadow) was 11 years old, and barely green broke. He had been used as a herd stallion for probably the first 8 years of his life, then gelded and shown. (He parks out and 'looks pretty' at the slightest hint of a camera) He had 2 speeds, flat out rack, and stop and park. He quickly took over lead of our little band, but other than a tendency to herd the mares and challenge the geldings across the back fence, he had no other stallion tendencies.

That spring a mini mare I rescued produced a surprise foal. The foal had many (expensive) problems, and was tiny so we kept the two of them separated in a corner paddock. From the moment the foal was born, Mithril guarded the fence line. No one else was allowed near the foal. When we finally turned the mare and baby out, he carefully herded the two away from everyone else. Once the foal got bold enough to explore, Mithril would herd her back to mom. If we were working on the foal, training or giving meds, he would stand guard until we were finished and take the foal back to mom.

We found a home for mare and baby, so didn't have to go through the weaning. But this spring, of course, history repeated it's self. The Morgan rescue (who wasn't in foal) produced a surprise baby. As you know, we decided because of mom's tendency to kick to wean the baby early. Last week we did that, and what occurred was fascinating.

We sneakily put Rocket in a stall with grain, loaded mom (Cricket) in a trailer, and off she went. Rocket Man came out of the stall, and started calling for mom. Mithril came up to him, and followed him around as he ran the pasture calling. I saw Mithril herd him away from the fences, away from the 'evil' gelding neighbors, generally watching over him.

I went out in the pasture to get some photos of this, because Rocket Man was looking amazing with his tail up in the air, all alert. But as soon as I went in the pasture, Rocket came up to me for comfort. Since all he wanted was me to scratch him, I decided to leave. As I walked back to the barn, it suddenly occurred to Rocket that mom may still be in the barn!! He went charging back to the barn, with Mithril right behind him. While Rocket just wandered around and called, Mithril went up to the barn, and looked in Cricket's stall for her! He them looked at me, then in all the other stalls. Once he realized Cricket was really gone, Mithril put his ears back, and trudged away from the barn. When he got to Rocket he nipped him, and herded him back to the mares. I could just hear him thinking "Cricket is gone, and now 'I' have to babysit!!"

It has been two weeks now, and Mithril is still looking out for Rocket. If Killian (my 15 month old MFT colt) gets too rough, Mithril separates them. Since Rocket is the last to finish eating, Mithril waits at the gate for him. He takes his responsibilities seriously.
Posted by Shadow Rider at 1:06 PM 2 comments:

They grow up, and they get hurt. It is amazing, how an animal that large, who for eons has lived in the wild and survived, can't make it to weaning in suburbia without getting hurt.

But lets go back to the beginning. First, this foal wasn't supposed to be. A Reg. Morgan mare ended up in a meat dealer's yard (yes, horses are still being sold and slaughtered for meat, they just ship them a few miles further to Canada and Mexico). A Morgan rescue group was trying to save her, but no one had space for a 3 yr old mare not under saddle. I saw her, and she looked exactly like the former horse of a friend of mine. I had the space, so I took her. Picked her up, no problem, snorty but a good girl. Brought her home and while I had her in quarantine I'm thinking 'She's really got a belly.' Most horses I get from the dealers are underweight, but I reasoned this was a Morgan, a breed that can almost live off air.

She came down with an upper resp. infection, so while I had the vet out, I asked them to palp her, and see if she was in foal. The vet checked her out, nope, no baby. Ok, then once quarantine was over, and the weather decided to warm up, I was going to hitch her and do some driving. But by the time all that happened, she was REALLY big, and I'm thinking she's really wormy, or she pulled something over on the vet. Worming makes no difference, but then the baby 'drops' and I know she is really in foal.

Now I'm a bit panicked, dealers yards are full of drafts, donkeys, all sorts, and she was only 14.2 and a maiden mare. Was I about to have a mule or huge draft cross arrive? With some e-mails to Morgan folks (very helpful!) I got the previous registered owner's contact information, and gave him a call. Yep, she was bred, and yay! to a Reg. black Morgan stallion. Whew! Dodged the bullet there. A reg. foal at least has a better chance in this too many horses too little hay economy.

On July 10 the mare had her foal. Black, gorgeous, and HUGE! See slideshow here.
He earned the name Rocket Man because he would fly around the pasture.

As foals do, he grew, got more active and bold. He also got even more adorable, and would do anything for scratches. Next slide show here.

When he was 6 weeks old, we left town for a family wedding, leaving a friend in charge of the horses.

So of course someone got hurt. (you knew that was coming) Of course it was the cute adorable baby. When I got the voice mail I am wondering what hazard was there that I didn't clear. What could he have cut himself on? I called some friends, who dashed over to give me an idea of how bad it was. I could tell it was bad but I wasn't prepared for the cell phone photos. 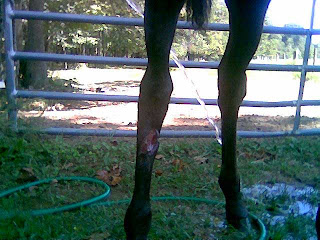 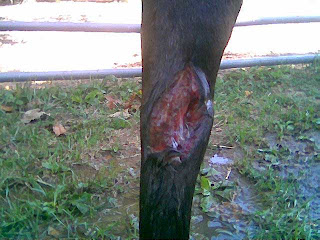 Fortunately, both my friends are level headed, and while I got the vet on the phone, they hosed him off, and put a nicely professional pressure bandage on to get the swelling down. (just in case there was enough skin to stitch together) 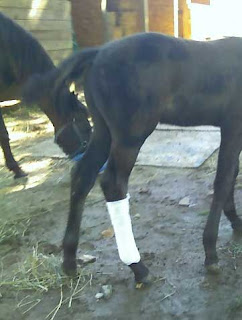 He was sore, ouchy, and not a happy camper, but was very good about being caught, having a halter put on him (wrong one and too big, his was not to be found) standing to be hosed, and them wrapped.

When my vet got there, she decided there wasn't anything she could stitch up, so she trimmed the wound, scrubbed it out, and wrapped him up like a mummy. Nothing major was cut or damaged, just a lovely scoop of skin and muscle taken out. She also concurred it had to be a kick.
The main concern was to keep it clean, and allow the wound to fill in the missing areas. 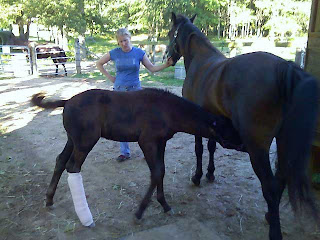 He is now running around the pasture like nothing happened. At first it was a bit of a wrestling match to get his meds in him, but now he looks for them (it must be food, right?). When I gave him his first worming, I made sure it was apple flavored, so he really thinks that is the good stuff now!

He over 2 months old now, and is happily pestering the other horses, running, playing and totally ignoring his bandage. Still comes up and begs to be scratched.

But, as mom is getting even more insistent he stay away, we will be weaning him soon. (before she hurts him again!)
Posted by Shadow Rider at 2:15 PM No comments: