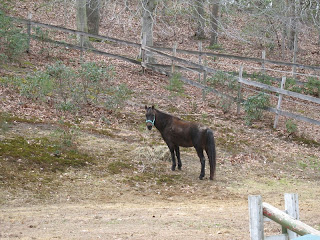 I took Cricket to 'Boot Camp' this weekend. By Boot Camp, I mean a month or so with a friend who enjoys schooling my spare horse 'du jour'. She gets to play with a horse without the full time ownership hassle, I get free top notch schooling. Win-win for us, often the horses aren't as enthused. They get handled daily, ridden 4-5 times a week, and challenged to learn new things. We all know horses generally prefer to stand around and eat. The barn is a small community barn, 2 other horses, so mine usually get individual turnout. This is Cricket in the ring/paddock. She can see the other two horses, and the barn, but is separated and gets fed in the same paddock.

In the past I have sent over TB, Drafts, Crosses, QH, a variety of horses who have all taken it fairly well in stride. But Cricket is the first Morgan to come to the barn. On the trip over there, I got the first inkling this may be an interesting time for my friend. I have a 3 horse slant load, which Cricket had ridden in 3 times before, and loaded in happily (after a few cookie bribes). I had a full hay net tied up and knotted which she immediately started munching on. All is fine until as I am going down the hwy, I look in the side mirror, and see Cricket's head sticking out the side window of the trailer! I pull over and open the escape door to see what was going on. She had untied the hay bag, and it was kicked to the back of the trailer. She was untied (no biggie, it was a quick release), and she had somehow released the latch on the window grating to open it. I latched the window grate back, left everything else like it was an went on my way..quickly! 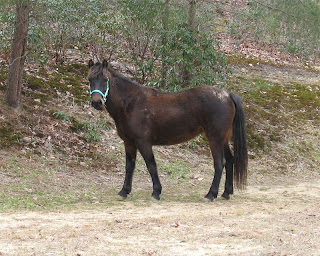 I get to the barn, and she unloaded perfectly, and since I was worried she was spooked about the trailer ride, I loaded her back up. No hesitation at all. I put her in the paddock, showed her the hay and water, then turned her loose. She checked out the ring, jumps, the horses over the fence, then started on the hay. No fuss at all. But, I saw the 'gate' they had for the paddock was 3 chains clipped across the opening. More than enough for the other horses I had brought, but I had my doubts about Cricket. I left her new safety halter on, just in case..

All was fine until the next day. After breakfast, the owner of one of the other horses was cleaning stalls in the barn, and felt a soft touch on her back. She turned around to see Cricket standing there, ears up, wondering what she was doing and could she help? She had simply stepped through the chains, and walked down to the barn where the humans were. She put Cricket back, and Cricket went back to her hay. But later in the day Cricket got out again, and then got in with the other two horses! She had made instant friend with one, who was protecting her against the more aggressive other horse. They have now made an intricate weaving with chains, ropes and some pcv pipe to keep her in the paddock. Personally, I'm betting on Cricket. She is smarter. But then she is a Morgan.

Oh and Boot Camp? Cricket is a star. She is doing well in her ring work, and on only her third time being ridden on trails, she went out alone for the first time without any hesitation. She is relishing any work she gets. Very bold and forward, but always willing to stop.

I named her Cricket when I first brought her home. She was small, black, and bouncing around the pasture hopping ditches, just like those little black crickets you get in the house. Now I know its her true name, because have you ever tried to catch, or keep out those crickets? They will get in where they want to be no matter what you do.
Posted by Shadow Rider at 1:55 PM 2 comments:

And I had to blog about it. This article by John Holland was passed on to me through a couple of rescue lists. Before you pro slaughter groups start rolling your eyes, and priming your keyboards to 'counter attack.' Lets just look at a couple of facts this article presents.

"..the New Holland auction in Pennsylvania is one of the largest slaughter auctions in the country. In October of 2008, they sold a total of 815 slaughter grade horses at an average price of $323, but despite rapidly worsening economic conditions, by February that number had dropped by 28% to 582 horses and the average price had risen by 31.6% to $425. It is largely the same story at auctions across the country."

So where are all these unwanted horses? According to the Slaughter advocates, we should be inundated with them. They should be filling up the pens at NH, should be loaded in empty trailers and left because they are not getting bids.

But the FACTS say numbers are down, and prices are up. How ya gonna spin that?
Posted by Shadow Rider at 1:10 PM No comments:

Ok, this is too much fun!

1. How old were you when you first started riding?
I first rode when I was 7, on a pony my parents bought me. But I didn't REALLY ride until I was 21.
2. First horse ridden:
Lady, 10 h Shetland saint
3. First horse trotted on:
Ginger, a saddlebred lesson horse I rode when I was 12. I convinced my mother I needed the Girl Scout Horsemanship badge and got lessons :-)
4. First horse cantered on:
Ginger
5. First Horse fallen off of:
Misty, a friends QH whom we were riding bareback in a pasture. Just slithered right off in a turn. (barrel horse)
6. Most recent horse fallen off of
Shadow, we had a difference of opinion on a canter depart.
7. Most terrifying fall:
Falls - plural. Neysa, my first horse regularly slung me off doing 90 degree turns at a full gallop.
8. First horse jumped with:
Neysa
9. First horse who ran away with you:
Neysa
10. First horse that scared the crap out of you:
Neysa (are we sensing a theme here?)
11. First horse shown :
Neysa
12. First horse to win a class with:
Shadow
13. Do you/have you taken lessons:
Yes, years of lessons in various disciplines
14. First horse you ever rode bareback:
Lady
15. First horse trail ridden with:
Neysa
16. Current Barn name:
Greenbank
17. Do you ride English or western?:
Both. Have also ridden saddleseat, Aussie and driven.
18. First Horse to place at a show with:
Neysa, 6th place at a pony club show in Equitation. (I beat other parents)
19. Ever been to horse camp?:
No! and I wanna go!
20. Ever been to a riding clinic?
Yes, several, but they were years ago.
21. Ridden sidesaddle?
Faked it by flipping the off stirrup over.
22. First horse leased:
Never leased a horse.
23. Last Horse Leased:
nada
24. Highest ribbon in a show:
High point champ in Versatility, ribbons and trophy
25. Ever been to an 'A' rated show?:
Yes, what a zoo!
26. Ever competed in pony games/relay races?:
We have done ribbon races, flag races, water glass, egg on spoon, etc.
27. Ever fallen off at a show
Amazingly enough, no. Despite barrel racing in an english saddle, and jumping in a cutback.
28. Do you ride Hunter/Jumpers?:
Yes, but if they realize I'm ridng a TWH, we don't place.
29. Have you ever barrel raced?
Yes, but lets say we will never be going to nationals, LOL!
30. Ever done pole bending?:
Yes, see above.
31. Favorite gait:
Rack/Running walk
32. Ever cantered bareback?:
Not voluntarily
33. Have you ever done dressage?:
Yes, I use dressage principles in all my training
34. Have you ever evented?:
Yes, much to the amusement of the judges.
35. Have you ever mucked a stall?:
Oh, yes, many many stalls. And eaten lunch next to the manure pile. (smell, what smell?)
36. Ever been bucked off?:
No, and I'd like to keep it that way!
37. Ever been on a horse that reared
Yes, many many times.
38. Horses or ponies.
Love ponies, but the gait is just too choppy. Big horses for me.
39. Do you wear a helmet?:
Yes
40. What's the highest you've jumped:
In shows, 3 ft, inadvertently on a cross country course, (after discussion with Shadow on which jump to take, coop or vertical) we instead jumped the 5 ft standard in the middle. *sigh*
41. Have you ever ridden at night?:
Yes, moonlight rides, coming home to late on the hwy, etc etc.
42. Do you watch horsey television shows?:
If I see them.
43. Have you ever been seriously hurt/injured from a fall?:
Falling off a horse, no, but I did get knocked down and stomped on by a horse, fracturing my leg.
44. Most falls in one lesson:
one
45. Do you ride in an arena/ring?:
Sometimes, but usually we hit the trails
46. Have you ever been trampled by a horse?:
Yep, by cranky TB broodie
47. Have you ever been bitten?:
Just yearling nips, solved that in a hurry.
48. Ever had your foot stepped on by a horse?:
Can't count the number of times, all toes on both feet except big toe have been broken at one time or another.
49: Favorite riding moment:
Galloping Shadow down the trail jumping jumps. :-) but swimming in the river is a close second.
50. Most fun horse you've ridden:
Shadow. We have been together over 20 years, and we can do anything. Plus, she loves to run and jump, and swim...


Ok, copy the questions below, and add in your own answers!

Labels: About you horse meme

This past Saturday while my husband diligently did some house chores, I loaded a couple horses up and went riding. The horses left behind gave me lots of pitiful looks as the 'Chosen Ones' got a snack in their stalls, then loaded in the trailer with full hay bags to keep them entertained. It was all self pity, they had all gotten breakfast.

Sunday my husband came with me to ride, and as it was close to breakfast, we decided to just halter the horses we wanted, and bring them in rather than bring the whole herd into the barn. My husband went to get his MFT gelding Mithril, who after being snubbed the day before, was having none of it. He kept walking away, and avoiding being caught even though my husband had cookies. Meanwhile Cricket the Morgan was following him around saying Me! Me! pick me! I wanna go! and practically putting her head in the halter. So he haltered her, brought her in and groomed her. Making Cricket a very happy girl. (yay, attention!) Then he put her in her stall with a flake of hay to munch, pulled my horse Shadow in (Shadow comes when she is called, esp with cookies
Posted by Shadow Rider at 1:51 PM No comments: