I don't show any more, but at one time I was a regular in the show ring. While I did have a goal, promoting the versatility of my breed of choice and earning Versatility Certificates, I never was a truly serious competitor. I just wanted to have fun. Plus, I know from my life experiences, if I took myself or my showing too seriously, the Universe would take her revenge!

My first show I was too broke to buy a morning coat to show in, so the night before the show I was up until 3 am sewing a skirt suit into a morning coat. it worked so well I had people asking me where I got it. This was the same show where I borrowed a western saddle for the western classes. The saddle didn't fit well, and my horse wasn't happy. (yes, it was Shadow) In the 3 gait class, when the judge called for a canter, Shadow bucked all the way around the ring. on the reverse, she did it again. Of course I didn't pin, and in the line up the Judge told me with a grin that he couldn't place me in the class, but he would give me an 85 on the ride. I loved that judge, he was sensible, fair, and funny.

I have shown at fairground with ground bees and the ring plowed like a field with huge dirt clods. (Anne Arundel fairgrounds) I've shown at the Howard County fair, which always seems to fall on the hottest most humid day of the year. One year a friends horse coliced and impacted. As we waited for the vet, she suddenly got a brilliant idea, loaded him in her trailer. He immediately pooped, and colic was over. Made perfect sense once we thought about it.

I have shown up at a competitive trail ride without a bridle for my horse. Yes, I know, brilliant. Fortunately it was the mighty pony Iceman I was riding, and I said what the heck and jumped on him with a halter and two leadlines. We got third.

Lexington is also where I got a blue ribbon in western reining because according to the judge, we were the only ones who got the pattern right. Who knew all those years of having to memorize a jumping course in 5 min. would come in handy!

Remember as you show to think about your partner. You horse doesn't understand about ribbons, they only do this to please you so make sure you keep the show fun for them. Bring them hay, water, flyspray, and some treats. Don't tack them up at 8am and sit on their back all day, give them a break to graze, take them for a walk. At a show is where I have found out the most interesting things about my horses. They will eat ice, drink out of a cup, drink Mt Dew right out of a bottle, eat pretzels, and are very patient while little kids pet their nose of sit on their backs. If shows stay fun and interesting for your horse, they will do better.

Everyone have fun out there this summer!
Posted by Shadow Rider at 4:11 PM No comments:

After 2 weeks we saw a couple of changes, Shadow started taking an interest in life again and the filly decided she belonged the the teen aged daughter of the good Samaritan helping me with them. It was a mutual attraction. The daughter had never had an interest in horses before, but something in the starved little filly touched her heart, and something in the gentle care of the teenager brought out trust in the filly.

It was decided that they would adopt the filly. It was a case of the horse picking the owner, and to this day and am delighted with how that came out.

It's good we had these little victories, because the abusers were not letting go easily. They contacted a police officer that was a friend of theirs, and fed him a long tale of theft and harassment. This officer contacted me and my friends in that state threatening arrest, etc if the horses weren't returned. It seems the abusers though the horses were still in that state. Not knowing any better, we tried to deal with that officer, and the phone calls and threats got worse. The officer harassed us at all hours of the day and night. We all started to worry about our physical safety, especially as I had spoken with the breeder of the Arab colt who fathered Shadows filly, and she had warned us these people were the kind to torch your house if you crossed them.

Meanwhile we were still trying to bring these two horses back from starvation. I moved Shadow to a facility with acres of grass, and starting feeding her, worming her, trimming her feet, updating vaccinations, all the normal things you do with a horse you own. All the things that hadn't been done in 2 years for her. 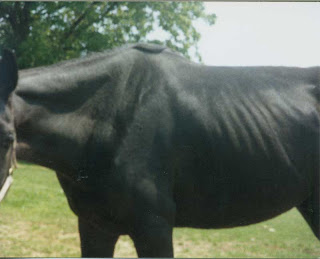 This was Shadow after 6 weeks of food and care. Better, but still a long way to go. I had to drive 60 miles each way to go take care of her every day. Meanwhile I had the added stress on wondering what to do about the nasty calls.

I had no clue what to do, after all, the police were calling me, they should be on MY side! I called my lawyer, and we prepared a package of all the documents, the bill of sale, bounced check, copy of the papers still in my name, the letters of intent, and a notation of the relevant laws of that state. My lawyer sent this to the police officer, with a note that if necessary it would be forwarded to his superiors with an accounting of his harassment.

Suddenly the calls stopped. I found out there never were any charges filed, it was all a bluff to try and get the horses back. I was still getting calls from the abusers though, and letters that ranged from pleading to threats. 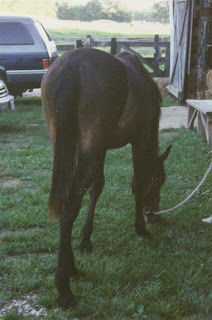 Meanwhile, the filly just blossomed! With good food, regular worming, and lots of love, (the vet said her liver damage would repair) she starting growing like a weed with the typical uneven growth spurts babies get. First her neck would grow, then her back legs, then her back, then front legs.

She recovered a lot quicker than Shadow, who still looked thin. I decided to move Shadow again, and advised the new owners of the filly, to move her as well, and not leave behind any information on where they were going. I would not have put it past the abusers to drive the distance just to hurt the horses if they couldn't steal them. By doing this, if either was approached we could in all honesty say we didn't know where either horse was.

The following fall we got together and took some photos. These are 7 months after the rescue. 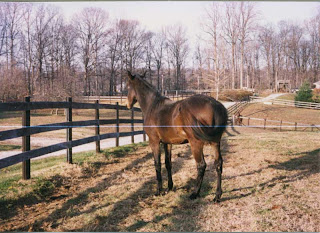 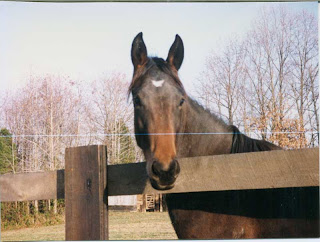 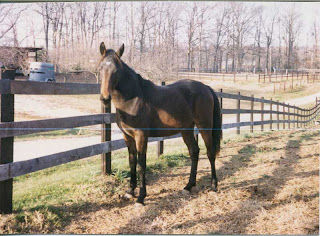 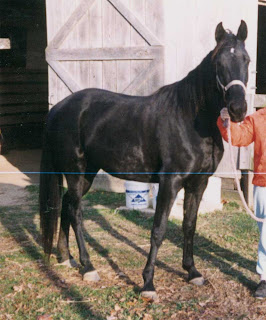 I moved and changed phone numbers, and finally stopped hearing from the abusers. I was cautious for many years though. Through this I learned good lessons. 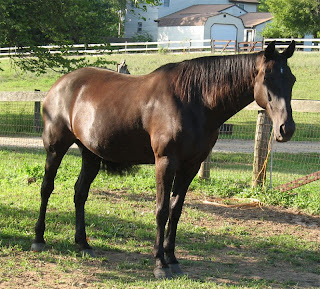 She took a while to recover emotionally from the abuse, and has never been the same horse I sold them. Back then she was a mischievous little rascal. Always into things, playing, nippy and full of life. Her experience sobered her, she was quite serious, and quite worried for a long time. I would take her to a show, or trail ride, and if I moved out of her sight, to go register or change, she would break her leadline and follow me. She was so afraid I would leave her somewhere again.

Eventually, she has realized she will never be left again, and has become confident and content in her place in my life. We have shown, traveled, experienced many things together (including many hilarious events). She is a TWHBEA Versatility Champion, we have done everything from Hunter paces to western reining to Competative Trail. She is my heart horse, I have promised her she would never have to worry again.
Posted by Shadow Rider at 6:19 PM 3 comments:

We stopped every other hour, but I was afraid to unload the horses, I didn't think they could get back in the trailer. Both were leaning against the sides. Neither would eat or drink. Finally, at 1 am, we pulled into the barn in MD. They had made it. Both staggered out of the trailer. I put them in a paddock, with water and hay. I was afraid to give them anything else without first having the vet look at them.

I had told my vet what I was doing, and she came out the next morning at first light. The news was not good. Shadow wasn't eating, she just stood in a corner. It was like she had made it until I got there, but was at the end of her strength. The vet said she was in the early stages of organ failure. We ran tests on both, the filly was in a bit better shape, but was undersized, and had liver damage from worms. 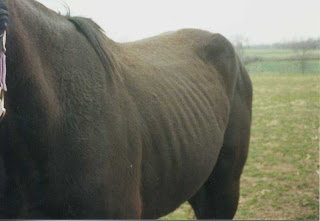 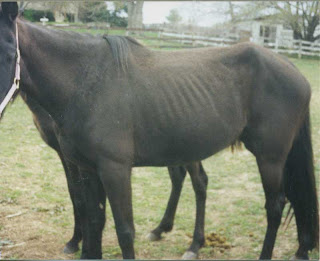 These photos were taken the next day. Notice you can see not just the ribs, but gaps between the ribs. Backbone, hip bones, and all of this with long wormy fur. Shadow especially seemed to be depressed. Not caring about food, water, anything. 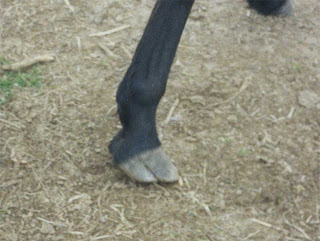 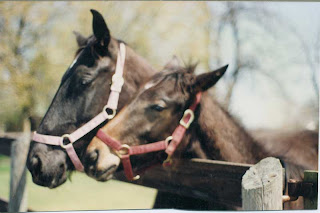 Notice the hollows above both their eyes, they have even lost the suborbital fat (if the baby ever had any)

Shadow would eat a bit if you hand fed her. and seemed to relax if you brushed, or just petted her. The filly wanted nothing to do with me or anyone after the trailering and vet visit. I had told some acquaintances what I was doing, and they volunteered to come help. We had shifts of people there every hour, brushing and feeding the two horses small bits of food according to what the vet recommended. For two weeks we did this.
Posted by Shadow Rider at 6:05 PM 2 comments: