Tonight at the barn 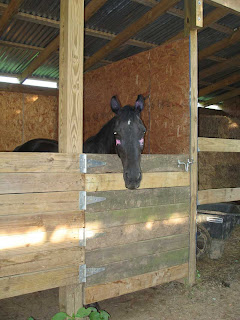 The horses wearing their 'War Paint'. That is Swat dabbed under their eyes, in their ears, and the base of their tails and under the belly to keep the little gnats and flies away. 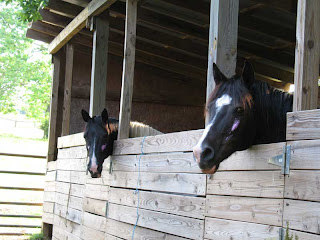 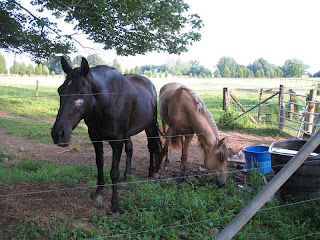 Shadow and Roheryn, the new girl in the pasture. Roheryn is only 2 and still very much a baby. Shadow has taken her under her wing and is showing her the ropes and pasture rules. 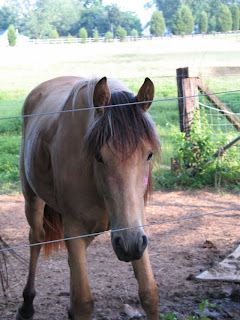 Posted by Shadow Rider at 10:45 PM No comments:

This is a post I have been avoiding. It was as if writing it would make it more real.

The previous post, our Easter ride was the last ride I had on my Shadow girl. She was the reason our ride was cut short. She started to have difficulty walking, and we turned back. On the way back she started dropping her hip, and I hopped off and walked her back to the trailers.

I had only ridden her a couple of times this spring, for short distances. She has seemed a bit off, but as she has an old injury to that hip that she has been compensating for on her own I thought it was a conditioning issue.

When we got back to the barn, and I watched her walk off, I saw an actual divot in her hip from her hip dropping, and I realized our rides were over. She is in great shape, doesn't look her 24 years (or act it) but the damage we did falling through a bridge back in '99, the past winter's snow and her fight with Lyme's disease last year have all taken their toll. It's time for her to become a pasture puff, and enjoy her days.

She has well earned her retirement. She has been an ambassador for her breed, and for horses in general. She has carried me over countless miles of trails, through hours of shows, parades, demos, reenactments. She has tolerated baths in the middle of winter, clippers, costumes, bands and balloons. She has galloped hunter paces (and we won our division!) and walked oh so carefully with a child on her back. She is the good girl, the one I can turn loose where ever we are to graze, and she will come when I call. She is the teacher, the one I pony the babies with, and lead green horses through water and over bridges. She has also taught many humans to ride, and is the reason a good number of people in MD have a TWH now.

As i find old photographs I will post them and tell stories of her life. She has been a well traveled girl, and has quite the personality. But through it all, even when I left her behind for 2 years, sunk her in bogs, and rode her over a bridge that collapsed, her trust in me has never wavered. 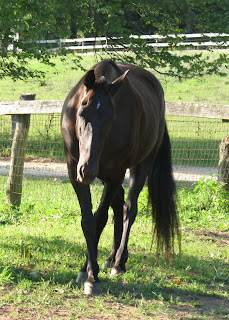 OPPC show, we actually got a ribbon in barrels! 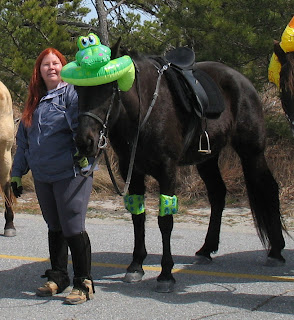 Beach ride, in march!
Did I mention the part where she is a saint? (note the 'swimmies', hard to get them on over hooves)
Posted by Shadow Rider at 3:42 PM No comments: