I couldn't believe he was serious. It was a 12 hour journey down there, then load up a horse in who knows what condition, and 12 hours back. He asked when I was off work, and he would make all the arrangements. It didn't matter to him how hard the task was, there was a wrong to be righted, and an innocent life to save.

I spoke to my lawyers, and with them wrote a letter of demand, asking for the full amount or return of the horse, and sent it certified mail. No reply. I sent a second letter, stating I would come and get the horse if the price was not paid. Again, no reply. I did this to insure all the legal steps were taken. I gave them a week to reply, then we planned our trip.

I had friends there who would help me with a place to stay, and to load the horses. I took halters, hay, grain, water buckets and a first aid kit, and we left one early morning. We drove straight there, getting to my friends house after dark, and just collapsed.

The next morning we met a few houses down from where Shadow was at 9 am. My friends there told me Shadow had changed, and wouldn't let anyone catch her. No one had touched her for months. They wouldn't come with me to the farm, because they were afraid of the people.

I had prepared a letter to leave at their house, so they would know what I had done. We walked down the road and knocked on the door. No one answered, but the dogs were there, so I will never know if they were home or not. I walked to the pasture and called Shadow. She came right up to me and put her head in the halter.

I believe that was one of the hardest moments of my life. Shadow was a literal rack of bones, with long, wormy hair. She looked like an ancient nag, and she still had a milk bag, so still was nursing the baby (now a yearling). But in her face was no recrimination, no reproach for leaving her, just "You came for me." I wanted to sit in the ditch and bawl at how she looked. At that moment, I decided the baby was coming too. She was still nursing, and no way was I leaving her to starve. I couldn't legally touch the other horses, but I could take my two.

It took a bit of time to walk Shadow the short distance to the trailer. She dragged her feet, and walked very slowly. Not because she was protesting, but because she didn't have the strength. I began to wonder if she could make the trip home. I may have come all this way just to put her down. The baby followed along, but wasn't halter broken, or even handled. We were able to get a halter on her, but the yearling size I brought was too large for her. She was smaller than most weanlings.

Shadow walked right into the trailer, and leaned against the side. She was having trouble standing. The baby we had to drag in, not so difficult since there was nothing to her, but she actually passed out for a moment from the halter pressure. Once they were loaded, we left immediately. We had a long road back, and I was worried if either could make it.
Posted by Shadow Rider at 3:31 PM No comments:

After I received the photo of Shadow and her baby, I called every friend I had in that area, and a very alarming picture started to emerge. The photo was taken when the baby was several days old, because that was when they finally found out Shadow had foaled. The pasture is across the street from their house, and they didn't know she had a baby for days. Not only did they not bother to feed to check the horses at least once a day, they didn't even look across the street.

There were 8 horses in a 2 acre field, with a run off stream and a bit of a swamp. That was all these horses had for food and water. There were several more in an acre behind their house. The colt who bred Shadow (supposedly was never out with her) was a 2 year old Arab that they bought from his breeder, with his 1 year old full sister, with the understanding he would be gelded. The breeder felt this colt wasn't of quality to breed, and told them she would give him the papers once he was gelded. They hadn't done it because they had the idea they would breed him to his full sister and make money selling Arabs.

Of course the more I found out, the worst it got. I called Animal Control and the SPCA, and found out they have been reported several times for leaving the horses with no care while they went out of town for weeks at a time. I contacted a lawyer there and one here in MD. They both were understanding, and didn't even charge me to consult. They told me to get my papers in order while they did research. I pulled out the sales contract and the bounced checks, and Shadow's papers, I was still legally her owner. The lawyers both said I could only file for the money owed. At first my only concern was to get the horses to safety. I tried to find a home for them there, but no one wanted to get involved without some sort of legal action.

During this research, I was in constant contact with Animal Control and the SPCA. Both of which refused to impound the horses. They would check on them, and cite the people, but that was it. Meanwhile the horses were left several times without food and water, and even when the people where they, they weren't feeding them enough. Through all this Shadow was nursing this baby.

Eventually between the two lawyers I found out a few important facts.
Well, this was all very well and good, but my horse (or horses, as even though it was now 9 months after I got the photo, the baby was still nursing) were 5 states, and 12 hours driving away. No one there would go get them. Finally, one of the Animal Control agents, tired of my calls said 'Why don't you just get the horses yourself?'

By now I was expecting any day to get a call that Shadow was dead. This was my baby. I had been there for every moment of her life from the moment she was foaled, until I left her behind to starve. I was frantic to do something, anything to save her.

I didn't have a truck, or a trailer. No way to get down there. I couldn't get a hauler to get them, none of them get involved in this mess. But as I was telling a friend about this dilemma, her husband said, 'I have a truck, I can get a trailer, lets go get your horse.'
Posted by Shadow Rider at 3:05 PM 2 comments:

The saga of Shadow

We are going through tough economic times. A lot of people can't afford to keep the horses they have, people breeding horses can't sell the babies. Horses end up in bad situations or on the pipeline for slaughter, and often the people who bred them either can't or won't do anything to save them.

You know, times really aren't that different. I know that's not popular to hear, but I have owned horses since 1981, and there have always been people selling out because they are broke, and farms that can't sell the horses they produce. Life can hit you hard.

In 1988 I had my mare Neysa, (Senator's Rebel Lady) and her 2 year old daughter Shadow (Wind's Shadows Linger). I found myself pregnant, with my then boyfriend (later husband) out of work. My parents lived 5 states away in MD and said 'Lots of jobs here, why not move?'

My boyfriend traveled to MD and landed a job in 2 days. The fates had spoken, we were moving to MD. But, checking on barn prices in MD, I realized I would only be able to keep one horse here. Full board where I was living was $100 a month, it started at $500 per month in MD! Of course there were cheaper options, but none that I could find long distance. Remember, this was before the internet was big. So I had to sell one of my horses. I thought my 2 year old Shadow had the best chance of a good home as Neysa was a typical ex show horse, snorty, brilliant, and full of go. Not many trail riders would be interested in her.

I put out ads, but there isn't much interest in a 2 year old barely under saddle. (2 short rides) Finally, the neighbor of some friend were interested. We struck a deal, they would make payments, and when she was paid off I would send the papers. They handed me a check, and off I went the next day to MD. Note* Yes, I did have a contract, spelling out every detail of the transaction, signed by both parties.
A couple weeks later, after we had everything sorted out, apt., bank, etc. we deposited the check, and it promptly bounced. I called them and they promised another check. Meanwhile I was setting up an apt. for a baby, arranging shipping for Neysa, and job hunting. I got another check, it bounced. This went on for 6 months. Finally, I called my friends and asked, do they love her? Are they taking care of her? "Yes, yes," I was assured, "They love Shadow." So I decided to let it drop. As long as she had a good home, I was happy.

A year later, another friend in the area went to see Shadow, and sent me a photo. They were not a horse person, and were just excited because Surprise! Shadow had a baby. The photo showed an emaciated Shadow, with backbone and hips sticking out, and the tiniest goat sized baby by her side. 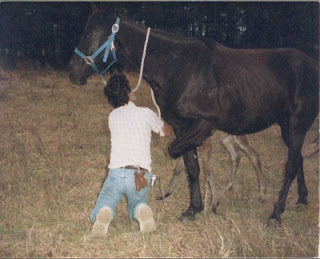 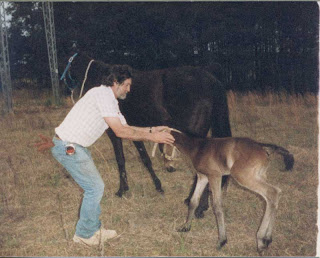 These are old photos, so it is hard to see on the web what alarmed me so much, but this is a 3 year old, with a several day old baby. Her backbone is sticking up and every rib is showing. The baby should be starting to show some roundness and instead still looks newborn lanky.

to be continued...
Posted by Shadow Rider at 2:46 PM No comments: