A Tale of Two Fillies

Pretty accurate assessment. The best of times is to have two pretty new horses to play with, both well bred, good conformation, and gorgeous color. The worst of times is the fact they are both untrained, and I am the one who has to train them.

Back in 1998, I decided I was training my last green horse. At the time I had a colt I had bred myself out of my Senator mare by a Sun's Delight stud. As I worked my way through temper tantrums and stubbornness (teenager years) I thought "When I finally have to retire Shadow, I'm just buying a fully broke horse."

Fast forward to 2010, I've finally realized I really have to retire Shadow. I'm looking at a bunch of nice 3-5 year old mares. All well started, all pretty, but either out of my price range, or too far along in their training for their age. In other words, they were started very young, and my past experience has shown me this means soundness issues further down the road. I was seeing 2 year old babies that had 6 months of trail riding on them.

My next horse is going to be my last horse, so I want them to last. If not for the bridge accident, Shadow would still be going strong at 24. I want a horse that will be sound into at least late 20's, if not 30's. I figure by the time this horse is in their 30's, and I'm in my 80's, we may both be ready to slow down a bit. Maybe..

So I bought a baby. Well, a 2 year old, who hadn't been touched except to teach her to be brushed, lead and load in a trailer. Funnily enough, I'm probably the reason this filly exists anyway. I had tried to breed Shadow to her sire, but Shadow didn't take for several reasons. I thought about buying the filly's dam back then, because I just thought she was gorgeous! So I talked to the owner of both and said you should cross them, it would be a nice blend of bloodlines. This filly was the result, so when I checked back in to see how she was doing, she was gorgeous! I did a little fast talking (she wasn't for sale) and had her shipped from Texas sight unseen. 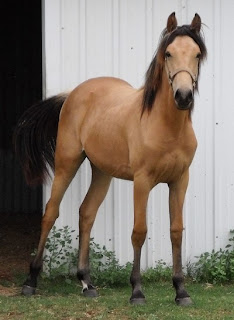 I'm sure you can see why.

So now I had a baby to train..

Meanwhile my husband had decided he didn't have the time for his high maintenance and needy gelding, so we sold him. I was on the lookout for a horse for him, and found one right in VA that was gray roan, perfect conformation, and barely started at 3 years old. (as in someone sat on her back). He has always wanted a gray roan, so we made the trade and now I have 2 to train. 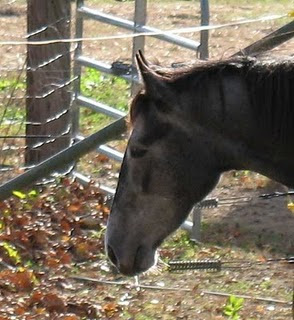 Enter in life, in all it's time consuming complexities. For the last year we have had graduations, I'm started my masters program, and we have had one vehicle breakdown after another, repairs on our home, and a wet spring. So other than manners training, the two fillies have been doing very little except get fat.

The two fillies have very different personalities. Rohern was range raised, very little handling until she was 2, Dixie was handled daily from birth, and treated like a princess.

So I wonder which one will be the most difficult??
Posted by Shadow Rider at 1:44 PM