A long time ago (17 years ago, in fact) I went to a local auction in Millersville. It was a favorite of many of the local horse people, we would all show up, eat Pit Beef BBQ, buy some tack, and swap tales. The horses were a mix of OTTB and various grade horses and ponies.

At this auction, I bought a young stud pony I named Iceman. Everyone who knew me at the auction laughed at me for buying him. Three years later Iceman was taking my students to shows and winning in everything from hunter to western to trail. Skip forward a few more years and I was going through a divorce and for financial reasons had to sell Ice and all my horses (except Shadow). I kept in touch with the place who bought him, and when I recovered financially tried to buy him back. I kept calling every 6 months and kept getting told they weren't interested in selling until one day I was told he had been sold months before to a barn up in Connecticut. I resigned myself to never getting him back, but always watched ads and registered at sites like Horse Reunions just in case.

Fast forward to this summer, when I had a SSH gelding for sale. One of the people who came to look at him was talking about her daughter's pony and how much fun it was to keep a creamello pony clean. She kept taking about 'Icy'. I asked if he was 13.2, blue-gray eyes, cream with white mane and tail, back socks and a wide blaze? Yes, she had my Iceman! Iceman had been her lesson pony and her students and her daughter had been winning ribbons on him for 10 years. She wasn't using him for lessons anymore, and after hearing the stories about him, decided he should come back to us. 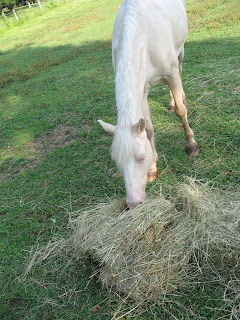 The first few days he was a bit low key and hesitant. I kept him separate from the other horses and in a small paddock. I then tried him out with one other horse and he got a bit more relaxed. He met Shadow again, and they seemed to remember each other, but no great reunion. Then I turned him out in the main pasture. He walked around a bit, sniffed the ground, and then.. 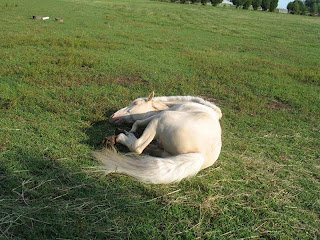 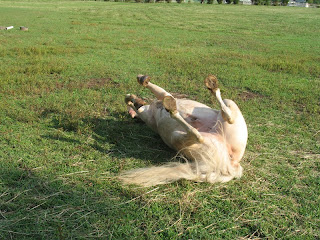 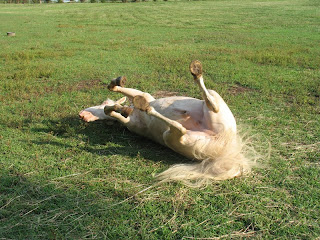 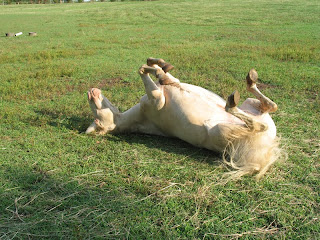 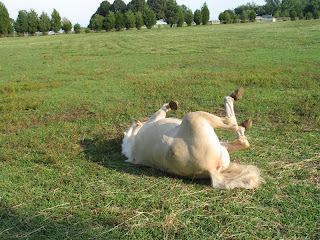 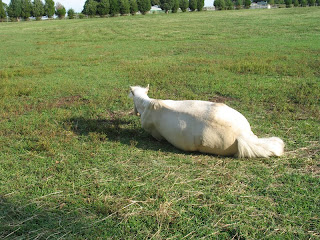 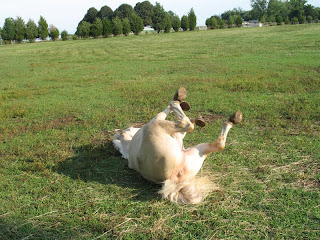 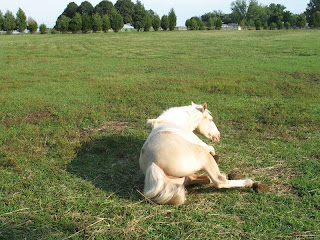 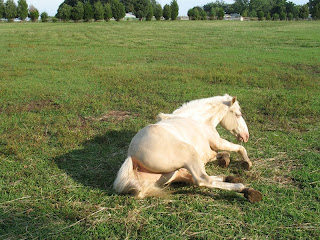 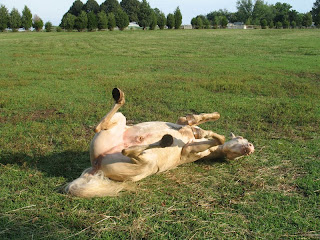 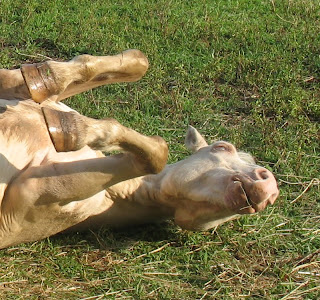 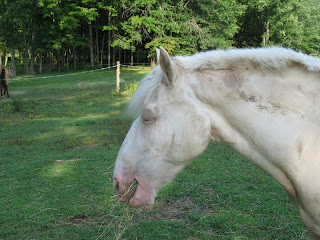 Nicely dirty and covered with grass.

We are very excited and happy to have him home. Iceman was my son's pony, and he has been out to the barn often to see him and play with him. Rather a fun sight seeing them run in the pasture and play, my son is 6 ft tall now. We plan on driving a bit, some trail riding, and some grandchildren of friends will need their first pony rides. Thank you Joanna, for making this possible! 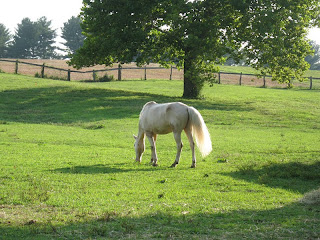 That's my Iceman!!!! I'm so glad you have him and that he's safe and sound again. Can I visit if I ever make it back to Maryland?

Just out of curiosity - does he put his head in between his legs when you pick up his front left foot? If he still does that, sorry. I tried to teach him to bow when I was like 11 and didn't exactly have the right technique...

Sure, anytime!
As for the bowing, no he doesn't do it, but I'll see what happens when a carrot is involved.