Dixie had been doing well with lunging, and work with the saddle, so we decided to step up on her and see how she did. We first followed her usual routine, grooming, saddling, lunging in the round pen.

I then brought my horse Shadow out so that if Dixie did well, I could pony her around with a rider on her back. We brought the mounting block into the round pen, and brought Dixie over to it. She was quite relaxed, we had done this many times. We stepped up on her, then off, and Dixie never moved. We then mounted her, and asked her to walk off.

This happens a lot with green horses, they don't understand we actually want them to walk while we are on them, LOL! So I led her while my friend rode, and we got her moving. While my friend rode, I stood in the center, so I could give her lunging cues that matched what her rider was asking her.

She did very well, so well my friend decided to skip the ponying, and just ride following Shadow. I mounted Shadow and off we went around the pasture. Dixie quickly made it plain she didn't feel she had to follow Shadow! 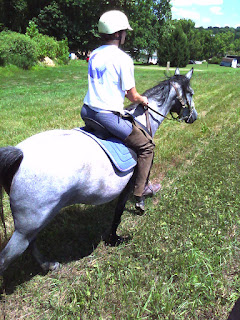 So we decided to ride out into the hay fields. 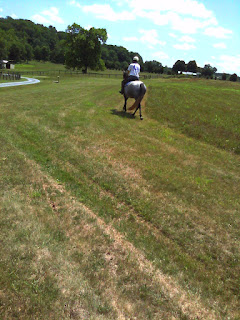 This was my view a lot of the time! Not only did Dixie not care where Shadow was, but she was quite willing to lead, investigate scary things by approaching and sniffing, and walk off on her own. We rode back to the barn, then passed it and went on down the road, doing a bit of slow gaiting. 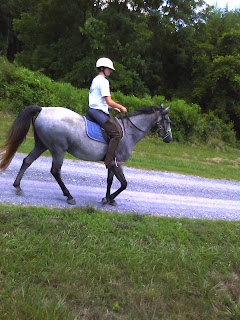 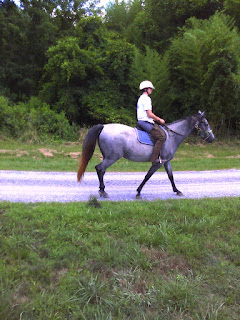 Dixie did great! We are going to take her out tomorrow and have some more fun.
Posted by Shadow Rider at 11:52 PM